Veterans Village of San Diego, along with many partner organizations, hosted a scaled-back, socially-distant version of its annual ‘Stand Down’ event Sunday morning.

By KATE MORRISSEY
NOV. 22, 2020
Read online here.
SAN DIEGO  —  An annual event designed to support veterans in need found a way to continue its mission despite the pandemic in a scaled-back, socially-distant version on Sunday morning.

“Stand Down,” organized by Veterans Village of San Diego, usually happens as a three-day gathering on the sports fields of San Diego High School in July, where hundreds of veterans receive help with issues like housing, employment, health, legal and other social services. They normally stay overnight at the event in large tents and celebrate their time together with a wide variety of group programming.

But because of COVID-19 concerns, the original event was cancelled in 2020.

U.S. Army veteran Ruperto received a backpack and other items during the annual “Stand Down” event hosted by nonprofit organization Veterans Village of San Diego on Sunday.
(Kristian Carreon/For The San Diego Union-Tribune)

“We recognized that there is still a need,” said Andre Simpson, executive vice president of Veterans Village of San Diego. “We felt we needed to pull something together to provide whatever services we could in the midst of this pandemic.”

So, on Sunday morning, veterans could walk up or drive up to San Diego High School where social service providers waited to greet them and volunteers waited to escort them, spaced out and masked, to attend to their needs at a one-day event.

Denny’s served biscuits and gravy with sausage, bacon and eggs along with hot coffee. Booths offered employment and housing help, forms for homeless court and state identification applications, as well as backpacks, clothing, blankets, toiletries and even pet supplies. 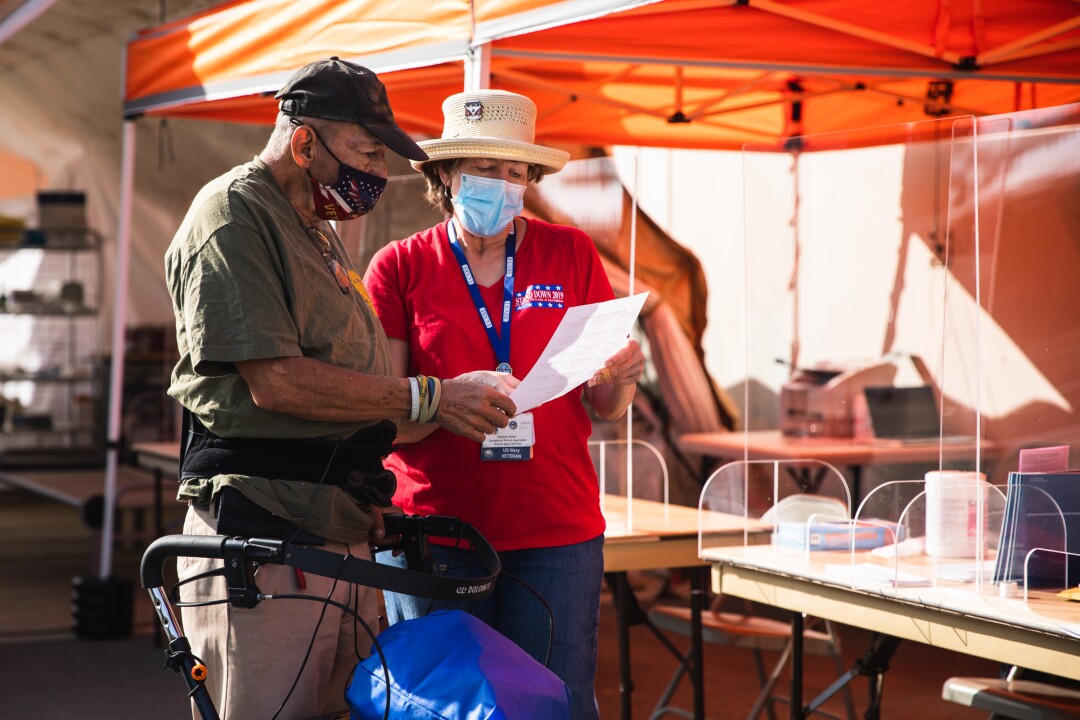 “This is the first time I’ve seen something offered like this on this level in all the cities I’ve been stationed,” said a Navy veteran who asked not to have his name published.

The Stand Down event began in 1988, and that first year, more than 500 attended the two-day event. Between 700 and 800 attended Stand Down last year.

Michael Conley, an Army veteran, said he’d been coming to Stand Down events for years and was focused this year on housing services. 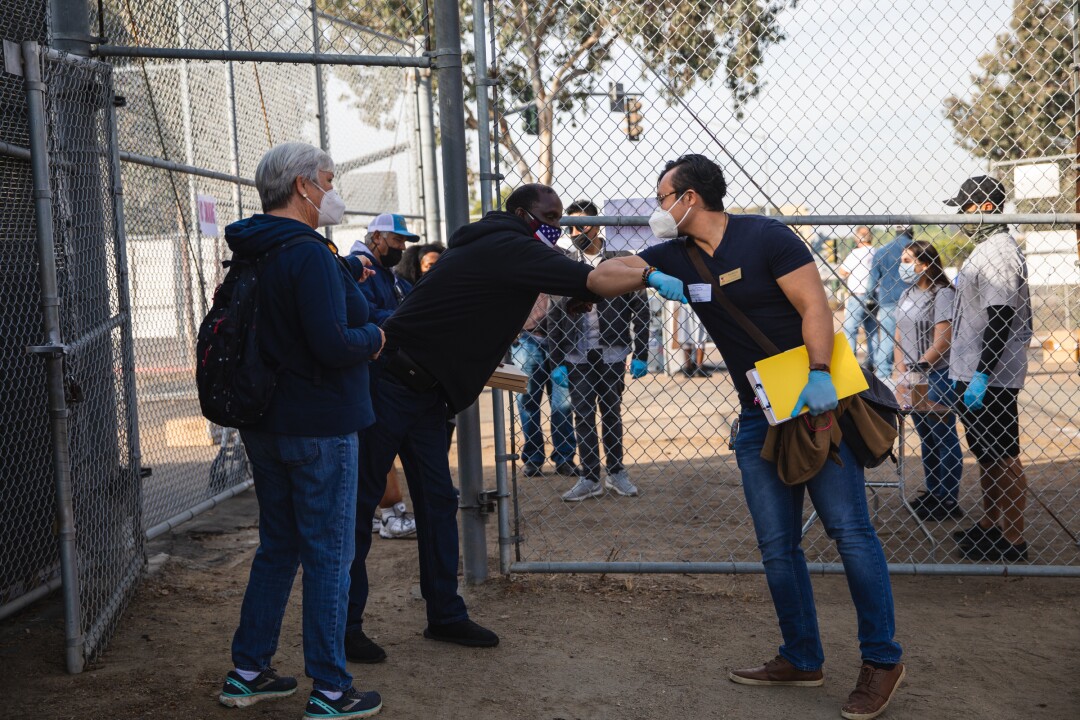 A veteran greets a volunteer escort at the annual “Stand Down” event hosted by non-profit organization Veterans Village of San Diego on Sunday. (Kristian Carreon/For The San Diego Union-Tribune)

He lamented the impact that the pandemic had on the event turnout, but he was pleased to have learned about a program that might help with his housing situation.

The majority of people that the event serves, Simpson said, are homeless, and others are at risk of becoming so.

Roughly 150 people pre-registered for the event, Simpson said. But even if there were only one veteran living on the streets who received help, he added, the endeavor would have been worth it. 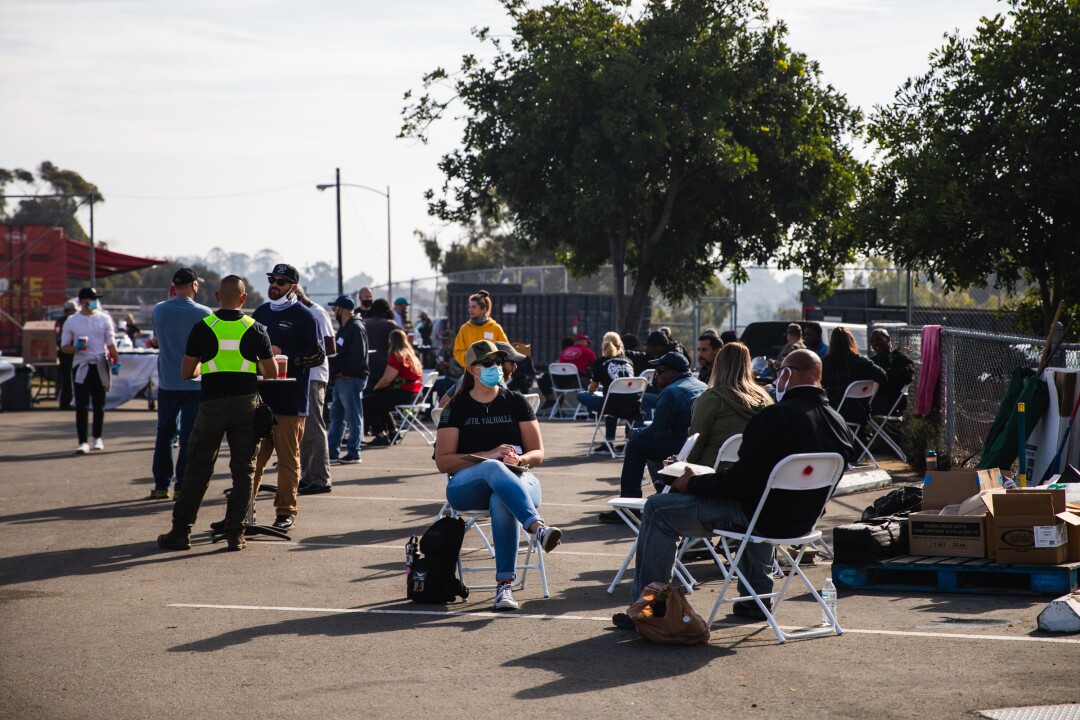 As he spoke, Simpson, who is himself a veteran of the Air Force, was greeted by a fellow Air Force veteran who was drawn to the emblem on his hat. The two traded stories about where they’d been stationed.

“I know what commitment I made when I raised my right hand and swore allegiance to defend our country,” Simpson said, “and for homeless veterans who made that same commitment, they deserve to be treated with respect and dignity and provided assistance to help them move forward with their lives.”

His organization, in an effort spearheaded by Stand Down director Darcy Pavich, worked closely with county officials to make sure the event followed all COVID-19 guidelines to keep attendees and volunteers alike as safe as possible. 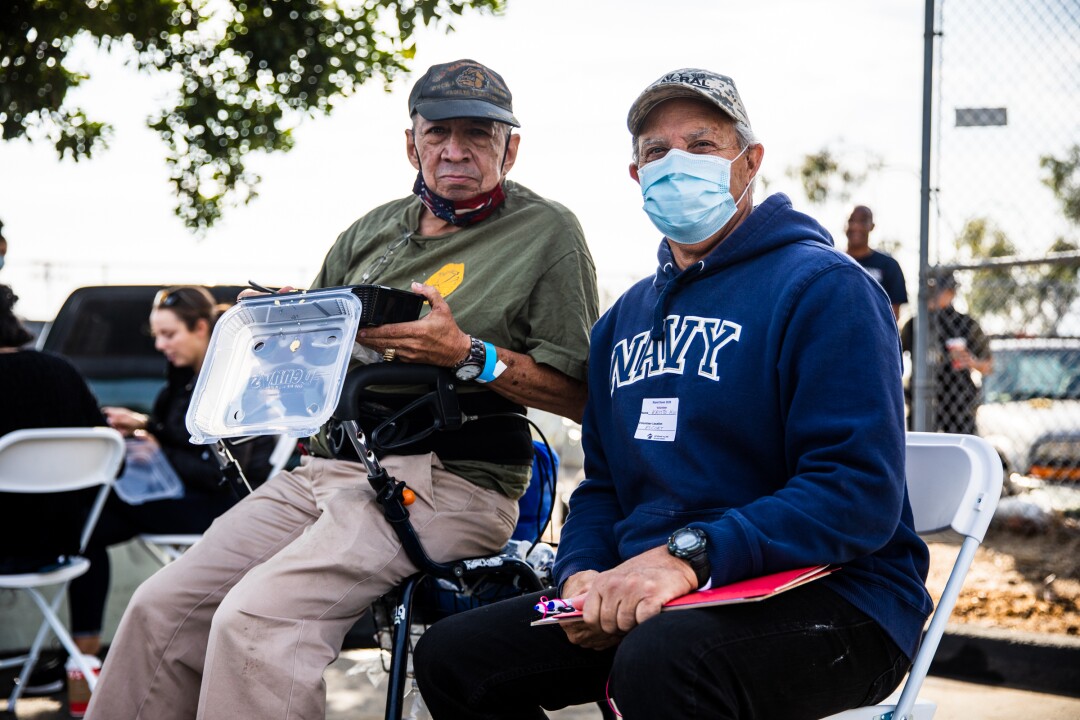 For Pavich, the logistical complications were all worthwhile when she saw veterans arriving.

“When they came in the gate and were met with an escort, they almost relaxed,” Pavich said. “Someone is going to help them and take them to what they need.”